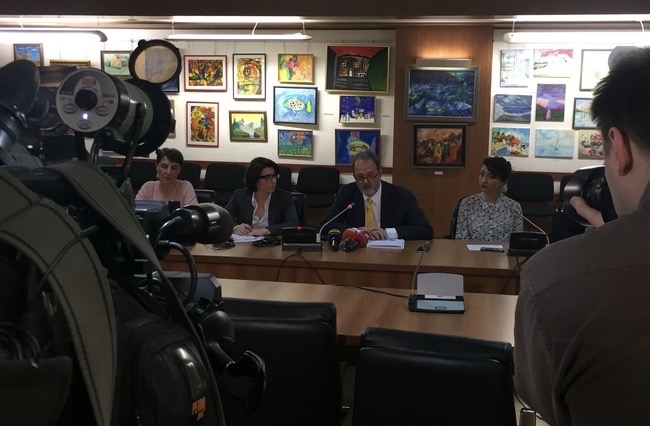 Tbilisi 30 March 2017 – Childhood literacy in Georgia will be a primary casualty of a well-meaning but destructive free schoolbook law that has handed the government control of all textbook production and stripped publishers and authors of their intellectual property rights, the IPA warned today.

Speaking at a press conference in Tbilisi, IPA Secretary General José Borghino said that the idea of free textbooks was fine in principle – but cautioned against pursuing it at any price.

‘This reckless policy is self-defeating because while it seeks to distribute free books in the short term, it has set the country’s educational publishing industry on a heading to annihilation. At the IPA we have seen it happen in other countries – such as Hungary and Poland – that state monopolies in textbook publishing always fail to deliver the quality resources that teachers, students and their parents deserve. State publishing monopolies capsize successful business models, cause long-term damage to educational performances and youth literacy, and cause the avoidable losses of thousands of the jobs that are generated by pluralistic, competitive publishing markets.’

Gvantsa Jobava, who chairs the Georgian Publishers and Booksellers Association (GPBA), a member of the IPA, said Georgian publishers fully supported free school books, but that the 2013 decree permitted the state to plunder publishers’ digital book files, print the books and give them away, with no requirement to pay for the intellectual property.

She said: ‘Georgian publishers and authors are not against the free distribution of textbooks. But this government policy will have a very negative impact on the Georgian educational system. Youth literacy in our country is in real danger because most publishers and authors cannot risk creating new textbooks anymore. Today the whole book market has been hit by serious financial problems, and many people have lost their jobs. There is only mistrust and misunderstanding between the Ministry of Education and Science and the publishing sector.’

Georgia’s Ministry of Education and Science has called on the nation’s publishers to enter a tender next month (April 2017) to provide the next raft of textbooks for 2018-2019. But a deep mistrust of the government’s tender process and the financial strain of four years of decimated revenues mean publishers can’t or won’t bid for the contract.

Joining the IPA delegation to Tblisi was Kristenn Einarsson, a Norwegian publisher and the new Chair of the IPA’s Freedom to Publish Committee, the internal body that leads the IPA’s freedom to publish advocacy worldwide.