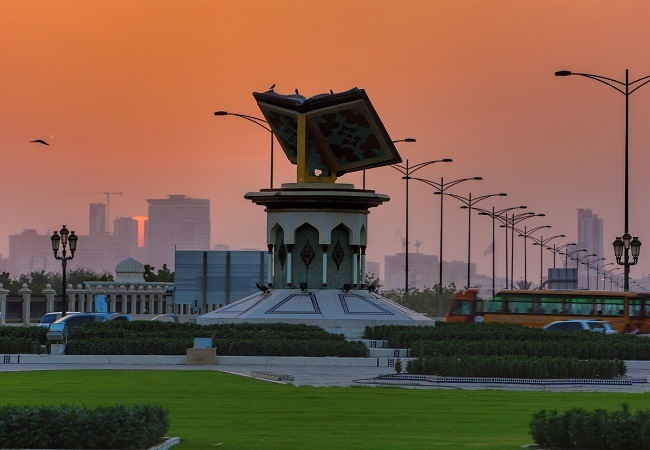 The city may hold the title for one designated year, from 23 April (UNESCO World Book Day) until 22 April of the following year. During that year it undertakes to organise and run a large number of events around books, literature and reading. The programme brings together the local and national book industries and puts books and book culture into the public eye. It attracts sponsorship and extra funding for book related institutions. The programme raises awareness for literacy and reading issues, libraries and books shops and highlights the overall benefits of a lively book culture. The title is also used to promote tourism and draw national and international attention to the literary heritage of a city and nation.

Six years after the launching of the World Book and Copyright Day (23 April), IPA had the idea, inspired by the successful experience of the city of Madrid, to nominate the best city programme aimed at promoting books during the period between one “Book Day” and the next.

Following IPA's idea, and a proposal by the Government of Spain, supported by many other countries, the UNESCO General Conference decided, on 2 November 2001, that the Organisation would grant its moral and intellectual support to the conception and implementation of the World Book Capital City initiative, by inviting the international professional organisations of the book chain to work together for its concretisation.

Following a public call for applications, the Advisory Committee (formed of IPA, IAF, IFLA and UNESCO) meet once every year in order to appoint a World Book Capital City. It makes a shortlist of three candidates and recommends a winner to the UNESCO's Director-General.

The nomination does not imply for UNESCO any financial prize, but conquering the title of World Book Capital City represents an important symbolic acknowledgement, also effective, for the winner city, in terms of communication and promotion. 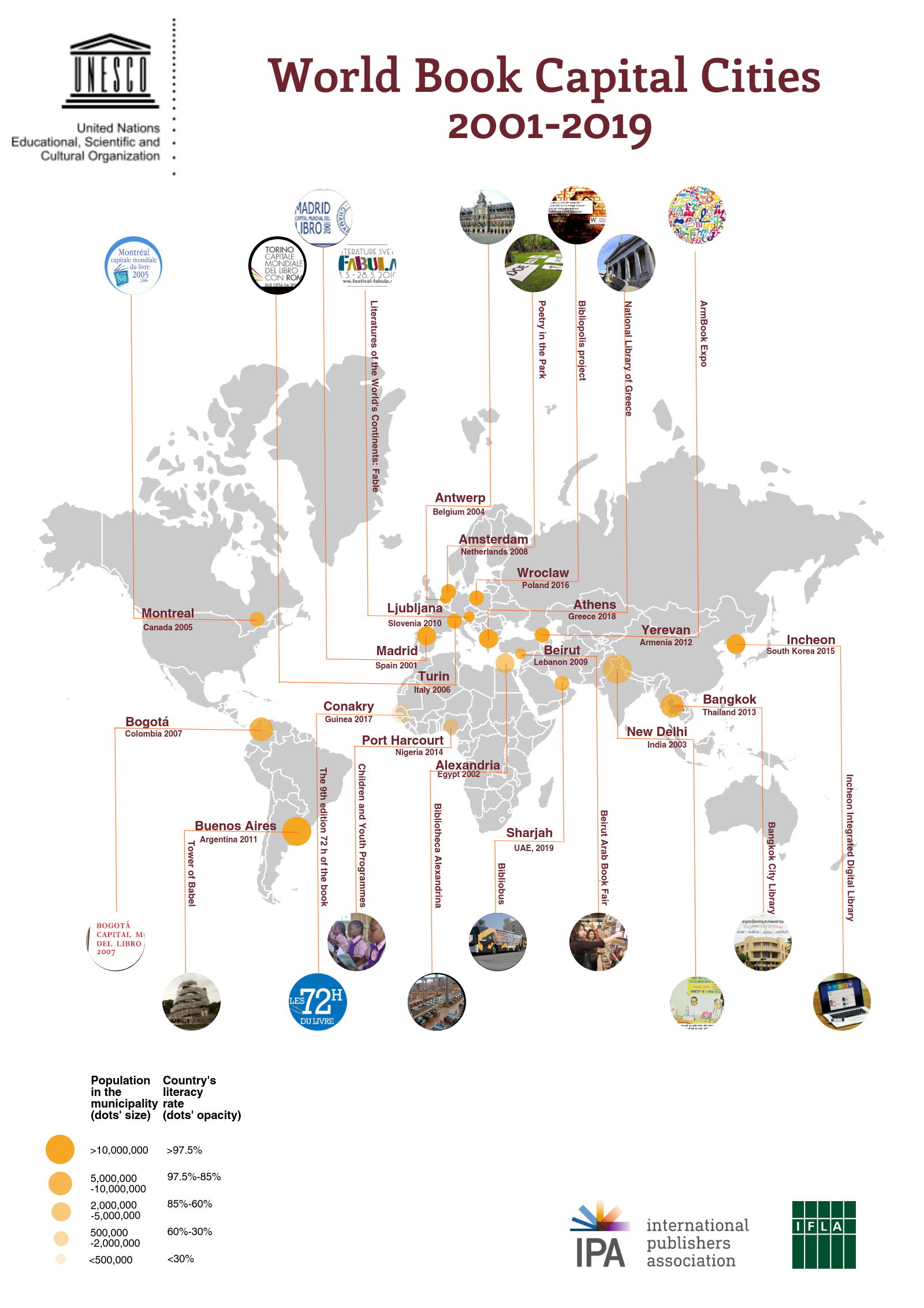 2022 - Guadalajara was named for its comprehensive plan for policies around the book to trigger social change, combat violence and build a culture of peace.

2021 - Tbilisi - The city's application was round the slogan "Ok. So your next book is…?" the programme focuses on the use of modern technologies as powerful tools for the promotion of reading among young people.

2020 - Kuala Lumpur - was selected because of the strong focus on inclusive education, the development of a knowledge-based society and accessible reading for all parts of the city’s population.

2019 - Sharjah - The city was selected because of the very innovative, comprehensive and inclusive nature of the application, with a community-focused activity program containing creative proposals to engage the very large migrant population. The city's objective is to foster a culture of reading in the United Arab Emirates and birth new initiatives to meet the challenge of literary creation in the area and in the rest of the Arab world.

2018 - Athens - The aim of the submitted programme is to build a society of knowledge by making books accessible to the city’s entire population, including migrants and refugees and involving in it the whole book industry.

2017 – Conakry - Guinea's government recognises that education and reading for pleasure are the drivers of change and social progress, but this cannot be achieved without the diffusion of books to the widest possible public. Conakry's tenure as World Book Capital City will go a long way to delivering this.

2016 – Wroclaw - Wroclaw was appointed World Book Capital 2016 by the nomination committee in light of the quality of its programme and especially thank to the focus on the grass-root community involvement.

2015 – Incheon – Incheon was nominated as World Book Capital 2015 on account of the quality of its programme, and the impact it will have on improving good integration of all stakeholders in the promotion of books and reading, access to books and writing in all formats to the citizens of Incheon and the Korean Peninsula during World Book Capital year and beyond.

2014 – Port Harcourt – Port Harcourt was nominated as World Book Capital 2014 on account of the quality of its programme, in particular its focus on youth, and the impact it will have on improving Nigeria's culture of books, reading, writing and publishing to improve literacy rates.

2013 – Bangkok – Bangkok was nominated as World Book Capital 2013 on account of its willingness to bring together all the various stakeholders of the book chain and beyond, for its community-focused program, and the high level of its commitement through the proposed activities.

2012 – Yerevan - Yerevan was nominated as World Book Capital 2012 on account of the quality and variety of its detailed, realistic, grass-roots program, focusing on universal issues and linking all the aspects and actors of the book chain.

2011 – Buenos Aires – Buenos Aires was nominated as World Book Capital 2011 on the account of the consolidated strategy underpinning the programme, as well as of the quality and variety of its candidature file.

2010 – Ljubljana – Ljubljana was selected for the quality of its application as well as for its diverse and complete programme, widely and enthusiastically supported by all players involved in the book industry (publishers, bookstores and libraries).

2008 – Amsterdam - According to the selection Committee’s, Amsterdam was elected because of the quality, variety and international aspect of its programme. The focus on freedom of expression was appreciated too.

2007 – Bogotá – The programme that enabled the Colombian capital city to conquer the title includes many creative activities for the promotion of reading, associating all local public and private stakeholders in the book sector.

2006 – Turin – The story of World Book Capitals saw an innovation when Turin came up with a programme in collaboration with a second city. In this case Rome created a programme of international book promotion as a back-up to Turin's which is already highly varied and professional.

2005 – Montreal – The programme that enabled Montreal to carry off the title of World Book Capital for 2005 features broad international coverage and comprises a whole series of subject areas worked out with the cooperation and commitment of all the actors in the city's book chain.

2004 – Antwerp – Thanks to its programme covering such an immense range of subjects (promotion, sales, services, youth, book professions, cultural diversity and urban cultural minorities), Antwerp obtained the title of World Book Capital for 2004.

2003 – New Delhi – On its nomination as World Book Capital City in 2003 this city, which is home to the largest number of publishers in India, launched a programme to promote publishing linked to all professional associations and political and social actors concerned with books, including government services.

2002 – Alexandria – In 2002 the great Egyptian city reopened its library of ancient renown and presented the new library which is a major project of our day.

2001 – Madrid – The Spanish capital took the initiative of creating this title and its first manifestations such as the book mountain around the Puerta de Alcalá.

load more hold SHIFT key to load all load all