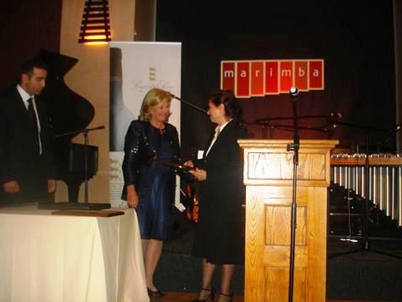 Ana Maria Cabanellas (IPA President) & Rakel Dink receiving the Prize on behalf of her late husband Hrant Dink on the occasion of the Freedom to Publish dinner jointly hosted by IPA and PASA, the Publishers Association of South Africa.

Hrant Dink, a Turk of Armenian descent, was the editor in chief and founder of the Armenian-Turkish weekly newspaper Agos, which sought to provide a voice for the Armenian community and create a dialogue between Turks and Armenians. In October 2006, he was convicted and given a six-month suspended sentence for the crime of "insulting Turkishness" under Article 301 of the Turkish Penal Code. On 19 January 2007, he was shot dead on the street in front of his Istanbul office at the age of 52.

Rahil Dink, Hrant Dink's widow, travelled to Cape Town from Istanbul to receive the posthumous prize in the name of her late husband, a man with whom IPA had been working closely since 2003. The Hrant Dink Foundation was founded in 2007 to carry on his message.

Anna Politkovskaya was the special correspondent for the Russian newspaper, Novaya Gazeta, who documented the horrific crimes committed in the war in Chechnya. She was also an outspoken critic of Vladimir Putin and of the Kremlin's role in Chechnya. She was shot and killed in her apartment building in Moscow on 7, October 2006, the apparent victim of a contract killing. She was 48.

Bjørn Smith-Simonsen, Chair of IPA's Freedom to Publish Committee, declared: "The murders of Dink and Politkovskaya were vile. In giving them the "2007 IPA Freedom Prize – Special Award", we rise to celebrate their courage, their humanity, and their witness. We rise to celebrate the free word in the face of oppressive regimes. We remind the Turkish authorities that Article 301 TPC needs to be abolished. We also hope that this special award will remind the Russian and Turkish authorities that the world's public still waits that full light is shed on these two cases and their underlying causes. We regret the lack of progress in the investigation into Politkovskaya's murder, and urge the Russian authorities to fulfil their duty. The trial of Hrant Dink's alleged killers will be starting on 2 July 2007 in Istanbul. We will monitor this trial. Those who instigated this murder should be identified and punished. Moreover, this trial should be held in a transparent manner. The court should be free of pressure and intimidation and should be able to hand down an impartial verdict".