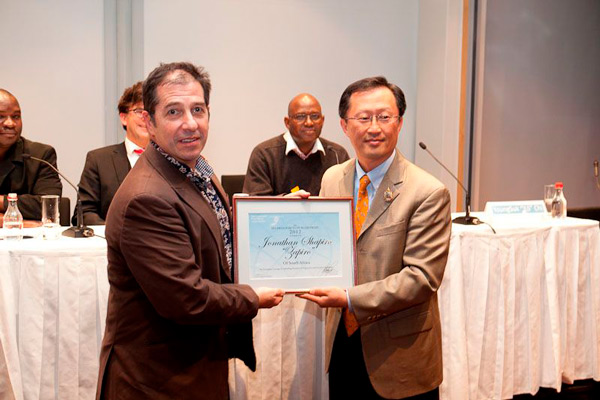 On 14 June 2012, the 29th IPA Congress ended with a celebration of freedom of expression by the 2012 IPA Freedom to Publish winner Jonathan Shapiro (“Zapiro”).

As tradition has it, IPA President YoungSuk "Y.S." Chi presented this year's award. The keynote speech was delivered by Brian Wafawarowa, Executive Director of the Publishers Association of South Africa (PASA). Jonathan Shapiro then accepted his Prize, and made a fascinating 45-minute presentation, showcasing and explaining his cartoons over the past 25 years. In accepting the award Jonathan Shapiro said: “It is an honour to receive such a meaningful award, one that has previously been given to courageous writers and activists under threat all over the world. And to receive it right now in South Africa is of particular significance to me. The African National Congress, the very movement that brought democracy to South Africa, now as the ruling party responds to criticism by curtailing the spread of information and by stifling freedom of expression. Journalists, whistleblowers, corruption-busters, cultural activists and even judges have been targeted. Politicians who demand that artists and writers conform will find that many of us consider it our duty to be patriotic sceptics”.

Born in 1958 in Cape Town, Shapiro is South Africa's best known and possibly most successful cartoonist. After attending the University of Cape Town, he was conscripted into the South African Army, where he chose not to bear arms and, while still in the military, became a participant in the End Conscription Campaign, designing its logo. In 1983, Shapiro became active in the newly-formed United Democratic Front (UDF), an anti-apartheid organisation. His involvement in the UDF led to his arrest under the Illegal Gatherings Act, and he was subsequently monitored by military intelligence. In 1987, Shapiro started as an editorial cartoonist for South newspaper. The following year, he was detained without trial as a political activist by security police shortly before leaving on a Fulbright Scholarship to the School of Visual Arts in New York. Since his return to South Africa in 1991, Shapiro has drawn educational comics on subjects such as AIDS, democracy and child abuse prevention. His work has been featured in both solo and group cartoon exhibitions in South Africa and internationally, and he regularly speaks and offers workshops on cartooning. Since 1996, he has published 17 annual cartoon collections. In 2008, he published an additional collection entitled The Mandela Files, a collection of cartoons featuring Nelson Mandela, in tribute to the former President. From 2003 to 2006, he attended the World Economic Forum(WEF) in Davos, Switzerland, as one of a group of invited cartoonists, and he is involved in the Cartooning for Peace initiative, a project started in October 2006 following the "Unlearning Intolerance" conference at the UN Headquarters in New York. He also continues to draw cartoons for many highly-regarded South African newspapers, including The Mail & Guardian, The Sunday Times and The Times.

In 2006, Jacob Zuma sued Zapiro for 15 million South African Rand over 3 cartoons done during Jacob Zuma's rape trial (he was acquitted). The amount demanded has been reduced, but the lawsuit has not been withdrawn.

In 2008, Jacob Zuma, later to become South Africa's President, sued Avusa Media, the publisher of Sunday Times, the ex-editor of the newspaper, and Shapiro over a September 2008 political cartoon by Zapiro depicting President Zuma about to rape "Lady Justice". As South Africa's President, Jacob Zuma is still pursuing this case and seeking 5 million South African Rand for defamation. The first court hearing, before Johannesburg's High Court, is due to take place on 25 October 2012.

Bjørn Smith-Simonsen, Chair of IPA's Freedom to Publish Committee, commented: "Jonathan Shapiro has had the enormous courage to draw and publish essential, and often controversial, political cartoons in newspapers and books for many years now. He has also been remarkably consistent in his fight for freedom of expression during the apartheid era, and in the years since it ended. He has been criticized and publicly intimidated in South Africa, and has even received death threats. The defamation lawsuit initiated against him by the country's President is set to begin on 25 October 2012. Despite the lawsuit, Jonathan Shapiro is not afraid. In fact, he is one of the brave voices speaking out against the dangers of corruption and authoritarianism, thus using with courage – through subversive humour – his right to freedom of expression and freedom to publish. Jonathan Shapiro exemplifies everything that the IPA Freedom to Publish prize stands for.

“We therefore call for Jonathan Shapiro's acquittal and on his government to stop using defamation lawsuits as a tool to stifle freedom of expression, and in this regard to uphold Article 16 of the South African Constitution, Article 12 of the 2002 Declaration of Principles on Freedom of Expression in Africa, and Article 19 of the Universal Declaration of Human Rights”.