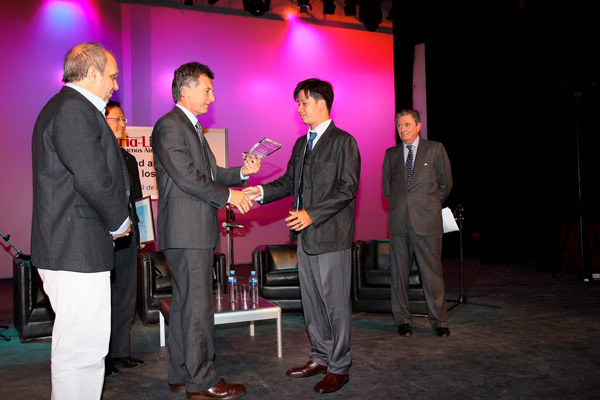 Bui Chat, founder and Giay Vun Publishing in Vietnam, is the recipient of the 2011 IPA Freedom to Publish Prize for his exemplary courage in upholding freedom to publish.

Giay Vun is devoted to printing and publishing of the works of Vietnam’s “pavement poets” beyond the reach of censorship authorities.  Under Bui Chat’s leadership, Giay Vun has directly assisted in the establishment in Vietnam of other publishing houses that operate independently and freely, publishing the works of banned authors and historians.

When the IPA Executive Committee named Bui Chat as winner of the 2011 IPA Freedom to Publish Prize, Bjørn Smith-Simonsen, Chair of IPA’s Freedom to Publish Committee said:   “After almost 10 years of persistent struggle, the publishing house founded by  Bui Chat has helped create an independent publishing movement in  Vietnam. Under extremely difficult conditions, the Giay Vun (scrap paper) publishing house has initiated a new movement of free thinkers, free writers, free artists who refuse to conform to the State rules of creation. It has helped tear down the barriers of censorship. This publishing house and his founder have been able, through their hard work, to restore faith in freedom of expression  and freedom to publish  in the country’s new generation. They have been able to enhance public awareness of the basic human rights of their fellow citizens: the freedom to think, the freedom to create, the freedom to publish and the freedom to read without fear of persecution. For all the reasons, the international publishing community recognises this courageous publisher today in Buenos Aires, the 2011 World Book Capital”.

In his speech opengin the award ceremony, IPA President YoungSuk "Y.S." Chi declared: "For decades, the people of Vietnam have been deprived of the right to seek accurate information, to be exposed to new ideas, and to the right to freely choose what they want to read.  Giay Vun Publishing has enormously contributed to the enhancement of public awareness of basic human rights: the freedom to think, the freedom to create, the freedom to publish and the freedom to read without fear of persecution. As we give Bui Chat the 2011 IPA Freedom to Publish Prize, please rise to honour the exemplary courage, determination, integrity, passion and forward thinking that he, and his colleagues, so clearly demonstrate.Thank you Bui Chat, and all the staff of Giay Vun Publishing. You are an inspiration to ALL of us" (the full speech is available here).

In accepting the award on behalf of the readers, colleagues, friends and supporters of Giay Vun, Bui Chat said: “Books have the power to make world free; freedom for those who publish books, for those who read books, and for those who discuss what books bring to them. We hope this award will be a significant boost to the development of the independent publishing movement and civil society in Vietnam.”