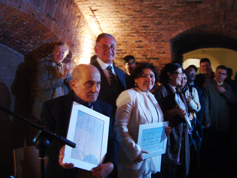 On 4 June 2009, IPA President Herman P. Spruijt formally awarded the 2009 IPA Freedom to Publish Prize to Sihem Bensedrine, Neziha Rjiba and Mohamed Talbi, founders of the Observatory for the Freedom of the Press, Publishing and Creation in Tunisia (OLPEC) for their exemplary courage in upholding freedom to publish.

The Award Ceremony took place on Kaholmen Island near Oslo, site of the historic Oscarsborg Fortress, as part of the Global Forum on Freedom of Expression, a Forum IPA was a partner of. The Award came following speeches by State Secretary Wegard Harsvik, Norwegian Ministry of Culture, and International PEN's International Secretary, writer Eugene Schoulgin.

Mr Mohamed Talbi, Dean of the Faculty of Arts of the University of Tunis, accepted the 2009 IPA Freedom to Publish Prize on behalf of the three founders of OLPEC. In a passionate and moving speech, which captivated the attention of the entire public, Mr Talbi, 90 years-old, energetically pleaded for growing local and international NGO involvement in world affairs as a way to fight dictatorship, and for great powers to support human rights more actively across the globe.

At the end of his speech, many came to congratulate and thank Mr Talbi wholeheartedly for his speech and lifelong dedication to human rights and freedom of expression in Tunisia.

IPA President Herman P. Spruijt had previously declared: "Sihem Bensedrine, Neziha Rjiba and Mohamed Talbi have consistently stood up for the right to freedom of expression and have suffered greatly as a result. OLPEC, which is not recognized by the Tunisian authorities, works under extremely difficult conditions. It issues alerts on freedom of expression violations, including an annual list of censored books at the Tunis Book Fair. This remarkable work is incredibly useful and should be honoured. We hope that the IPA Freedom to Publish Prize will encourage the three founders of OLPEC, and OLPEC itself, to continue their important work highlighting repeated freedom of expression and freedom to publish violations in Tunisia. In giving the three founders of OLPEC the 2009 IPA Freedom to Publish Prize, we remind the Tunisian authorities that Tunisian legislation must be amended or repealed to meet international standards, and that Tunisian practice must be changed for freedom of expression to flourish again in Tunisia". See Full Speech.

OLPEC was founded by Sihem Bensedrine, Neziha Rjiba (also known as Om Zied) and Mohamed Talbi in 2001. OLPEC's principal goal is to serve as a monitoring body for all forms of media and literary censorship in Tunisia, and to make these issues public. Despite repeatedly refusing them the right to legal recognition, OLPEC and its members continue fearlessly to highlight censorship in publishing and defend freedom of expression in the face of threats of jail and physical or other forms of attack. Sihem Bensedrine for instance was the victim of an extensive defamation campaign in 2005 and this year designed to shed doubt on her credibility as a human rights activist. The founders of OLPEC are under constant police surveillance. They are routinely harassed, as well as their guests. Their mail is intercepted. Their e-mails are bugged, and their access to the internet is blocked. Sihem Bensedrine is routinely prevented from travelling and has been assaulted at Tunis airport as recently as August 2008. Neziha Rjiba received threats by telephone just a few days before travelling to Oslo to receive the IPA Prize.

In a way, OLPEC emerged from the ashes of a publishing house, Aloes, established by Sihem Bensedrine. In December 1999, the offices of Aloes were burgled twice and its employees threatened by members of the security forces. Police intimidation and threats and break-ins finally led to the closure of this small publishing house, and the emergence in 2001 of a new group, OLPEC, aimed at defending freedom of expression, including the right to publish. OLPEC has no legal status in Tunisia. The Interior Ministry turned down a request for official NGO status in August 2001, citing the organisation's "unlawful designation". OLPEC filed a complaint for abuse of power but the administrative tribunal has yet to rule on the case. OLPEC's website was operated from Morocco due to Internet censorship in Tunisia. It is currently under reconstruction.