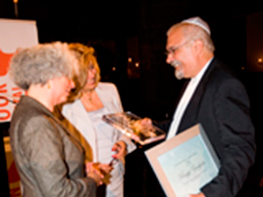 Ragıp Zarakolu is a Turkish publisher born in 1948. Since starting his publishing house Belge with his wife Ayse Nur in 1977, he has been subjected to harassment from the Turkish authorities. Ragıp Zarakolu refused to abandon his campaign for freedom of thought, striving "for an attitude of respect for different thoughts and cultures to become widespread in Turkey". Over the years, the charges brought by the Turkish authorities against Ragıp Zarakolu and his wife resulted in imprisonment, confiscation and destruction of books, and the imposition of heavy fines, endangering the survival of the Belge publishing house. Ragıp Zarakolu is the chairperson of the Freedom to Publish Committee of the Turkish Publishers Association (TPA/TYB).

IPA President Ana Maria Cabanellas stressed Ragıp Zarakolu's perseverance in the face of adversity, detailing the conditions which led to his recent conviction: "Publisher Zarakolu was condemned for the crime of « insulting Turkishness » under Article 301 of the Turkish Penal Code on 17 June 2007 for having published a book acknowledging the Armenian genocide entitled The Truth will set us free. Armenians and Turks reconciled by George Jerjian. This was the first conviction since this Article 301 was slightly amended on 30 April 2008. Over 1,000 people, including writers, publishers and journalists, have been brought to the courts under Article 301 since it was created in 2005. Around 30 publishers, writers and journalists are on trial today under Article 301. They are among a total of 79 charged under a range of laws that impinge on the right to free speech, which shows that Article 301, although being a symbol, is not the only tool used to prosecute free speech in Turkey ... States should refrain from prosecuting writers and publishers who have expressed non-violent opinions as penal prosecution of these writers and publishers may turn them into potential targets in the eyes of the most nationalistic circles. It is the State's duty to protect them, not to make targets of them". See full speech.

After receiving the prize, Ragıp Zarakolu stated his support for Turkey's continued process of European Union integration and urged EU officials to seriously monitor Turkey's ongoing censorship practices. Concluding the interview, Ragıp Zarakolu said that, being a normal human being, he often feels intimidated by the prosecutions he has been subjected to, but that he wants to carry on with his mission as a publisher - to find new books, new titles, to unveil taboos and to tackle thorny issues, thus fostering democratic values and upholding freedom to publish and human rights in his country.