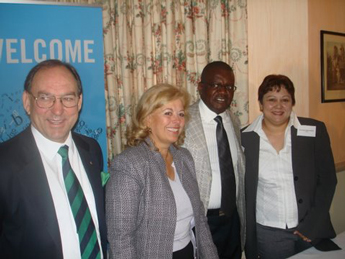 During the opening ceremony of the 2nd Cape Town Book Fair, Zimbabwean publisher Trevor Ncube received the 2007 IPA Freedom to Publish Prize in recognition of his exemplary courage in upholding freedom of expression and freedom to publish in his country and internationally.

Ana Maria Cabanellas, President of IPA, declared: "Trevor Ncube's work as a publisher and his wholehearted support of freedom of expression have often brought him into conflict with Zimbabwean authorities and endangered his personal safety. Despite repeated threats of violence and attempts to strip him of his Zimbabwean citizenship, Trevor Ncube's newspapers have persistently continued to expose corruption and human rights abuses in Zimbabwe, thus encouraging healthy dissent and criticism both in the public and private sectors. We award this Prize to Trevor Ncube in deep respect for his courage as a publisher and as a salute to the passion, the integrity, and the steadfastness that he so marvellously demonstrates".

Upon receiving the Prize, Trevor Ncube said: "For Africa to claim its rightful place in the community of nations African politicians need to begin to understand that freedom of expression and the freedom to publish are twin partners and not enemies in the task of creating democratic societies. Vibrant newspapers and a book reading culture free from political control are a vital ingredient to creating a market place of ideas to propel Africa's growth and development. Societies which live in perpetual fear of their politicians can never be creative and robust nations particularly in the knowledge based times we live in. Africa desperately needs to let loose the creative energies of her people by allowing them to think and express themselves freely. Indeed, only by setting her people free does Africa stand a chance of catching up with the rest of the world".