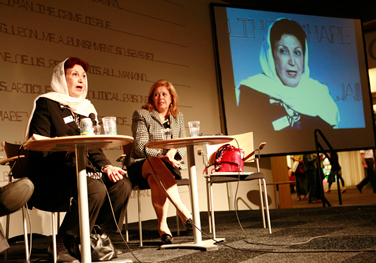 The first IPA Freedom Prize was awarded to Iranian publisher Shalah Lahiji during the opening ceremony of the 2006 Göteborg Book Fair on 21 September 2006.

Born in 1942, Shahla Lahiji became the first woman publisher in Iran, where she founded her publishing house Roshangaran in 1983. Since then, she has published over 200 titles, many of them works by women. Ms Lahiji is also a writer and a translator. Her publishing activities were severely threatened and disrupted on many occasions: In 2000, Shahla Lahiji faced several months of imprisonment, accused of "acting against national security" following the delivery of a speech at a cultural conference in Berlin. In 2005, her publishing house was petrol-bombed by unknown assailants and many manuscripts were burnt. The day-to-day incidents aimed at obstructing her strive for freedom to publish are countless. However, even under these circumstances, Ms Lahiji continues to enthusiastically defend her ideals. Shalah Lahiji publishes many famous authors, including Shirin Ebadi (Nobel Peace Prize 2003).

Lars Grahn, then Chair of IPA's Freedom to Publish Committee, declared: “Shahla Lahiji's work as a publisher and her wholehearted support of women's rights have often brought her into conflict with Iranian authorities and endangered her personal safety. Despite repeated death threats, Ms Lahiji has continued to courageously provide many authors with means to tell their story to the public, fighting against any opposition to freedom of expression or freedom to publish.”

The 28th IPA Publishers Congress, meeting in Seoul, Korea, in May 2008, adopted a resolution calling on Iran “to engage and implement refoms, which will improve the freedom to publish and will allow publishers to contribute freely to the cultural, social and economic wealth of Iran without fear of imprisonment, persecution or harassment for themselves, and their associates. Publishers, writers, journalists, bloggers and citizens currently in prison or under house arrest for having their constitutional rights to freedom of expression should be freed immediately”.